How does my team perform on physical-tactical performance compared to other clubs?

You can find the League Analysis under the Match Center tab.

Within the League Analysis, you will find multiple views providing you with insights on the Physical-Tactical Performance of your team, the opponent, or the whole league.

The League Overview provides a ranking of the physical performance of all teams.

95' Field Players-Averages
Comparison between teams can be done with normalized field player-averages. For the calculation of the match averages, we have excluded goalkeepers and corrected for substitutes and red cards by normalizing the values. The values are constructed from a value per minute, times 95. The 95 minutes is chosen because this is on average the duration of a match.

Substitute players affect the team average, therefore, it is in some cases desirable to filter on 'time on field'. By using the time on field slicer the players who played less than a certain amount of minutes (e.g. 60') can be excluded. By filtering on the minutes played the substitutes can be in- or excluded. In the example below all players who played less than 60 minutes will be excluded in the averages.

*Gross time refers to the players' total time on the field, including both 'ball dead' and 'ball alive' time.

All the used calculations and averages are explained here:

This scatter plot shows you a quick insight into the physical performance of your team compared with the other teams in the league. 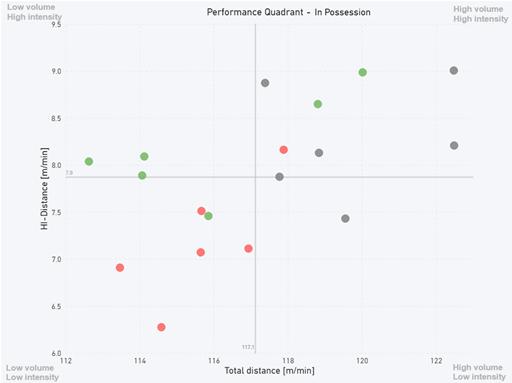 Compare teams based on their Physical Performance when either Defending or Attacking. Use the 'possession type' filter on top of the page to switch between both.

Overall Gross is the total distance covered, including all ball out of play periods.

Within the second column graph, the High-Intensity Distance above 20km/h in meters per minute is given on the y-axis. The colors indicate if the selected team won, lost, or draw the match. 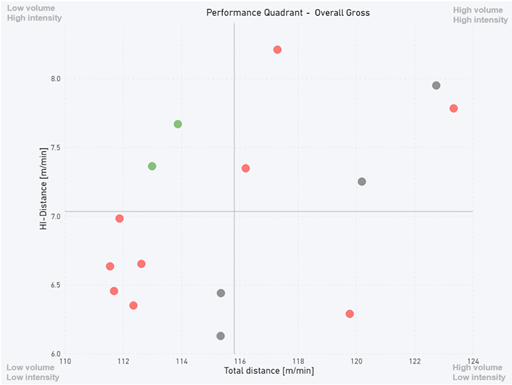 Compare the physical performance between player positions and team formations.

In the top pane you can set multiple filters for the whole page:

The page is divided into three rows to compare (team) formations or a set of combined formations. This will allow you to choose three different selections and easily make a comparison between them. On the left, you will find the formation filter each row is equipped with. Select one or more formations in order to filter the position benchmarks (averages) next to it.

Choose ‘Select all’ formations to see the League average (all formations included). 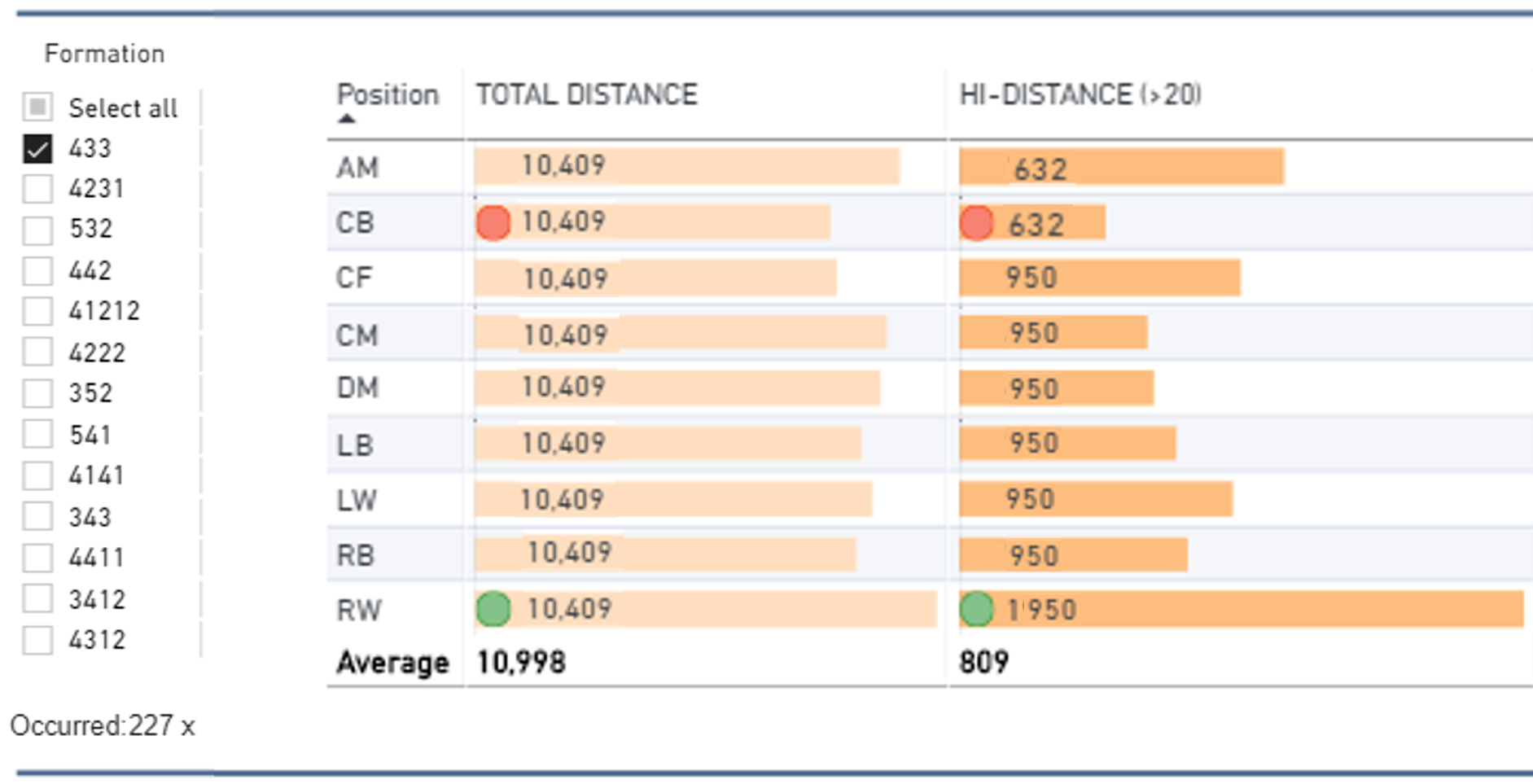 In this example, the values in the row will be the average of players who played for a team in a 4-4-3 formation during this season. In this case, a team starting with the 4-4-3 formation occurred 227 times.

Player positions used in this view are derived from tracking data.

By assigning the most likely position to a player, based on his relative position on the field, in the context of the position of others. We differentiate between the following positions: Goalkeeper (GK), Right back (RB), Centre Back (CB), Left Back (LB), Defensive Midfield (DM), Centre Midfield (CM), Attacking Midfield (AM), Right Wing (RW), Centre Forward (CF), Left Wing (LW).

The formations used in this view are based on the event data provider. The formation is often noted at the start of the match. Changes during the match are therefore not taken into account.

Compare the physical output of all the players in the league. The rich set of filters on this page allows you to make a relevant comparison between either teams, positons, formations, players, and matches.

The variables total distance, distance above 20km/h, and above 25km/h can be viewed as absolute (volume) or standardized (intensity) values.

If you have any questions or suggestions, please send us your feedback.

Use the chat icon on the right to directly get in touch with us.