What are the Game Principles?

Within the Opponent Analysis reports, there will be a range of detailed information on the Game Principles. This section aims to provide insights into how the upcoming opponent performs in certain aspects of play compared to other teams within the league.

Categorised into Build-up, Chance creation and Out of possession, each game principle offers the opportunity to see the opponent in a clear overview. Another important element is that the radar plots will include two measurements. The first will be the team's performance in all selected matches and the second, indicated with a dotted line, will show the performance of the team throughout the entire season.

Below, we see an example of the Radar Plot view that is presented for each Game Principle. In this case, the Out of possession type is shown. 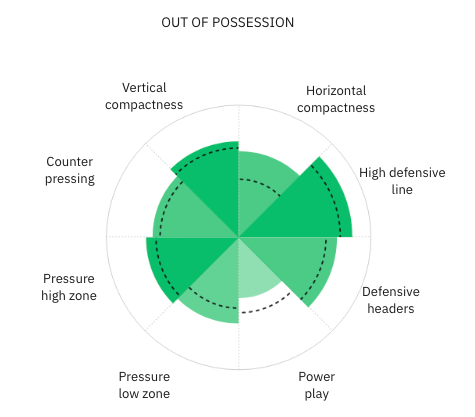 By breaking the analysis into the full season and selected matches, we can identify trends within both elements. For instance, we may see that FC Twente tend to favour Defensive high lines across the season but less so against top half opposition. This sort of information can be translated into tactical strategies for the upcoming match.

Within later pages of the report, Game Principles are also categorised on an individual player basis to show who are the most frequent performers in selected action groups. Please click on the relevant element for each Game Principle in depth - Build-up, Chance creation and Out of possession.