How to use the Opponent Analysis application

All information needed to get started on the application

Within the Opponent Analysis app, users are able to use a number of features to create the reports most suited to their needs. In this use case, we show how the usability of the app can be a useful tool in pre-match preparation.

For this example, we will be taking the role of Tottenham in preparation of an upcoming fixture against Wolverhampton Wanderers. In the app, users can select the match that they want to prepare for which will then generate the matches of the opponent that you want to analyse. 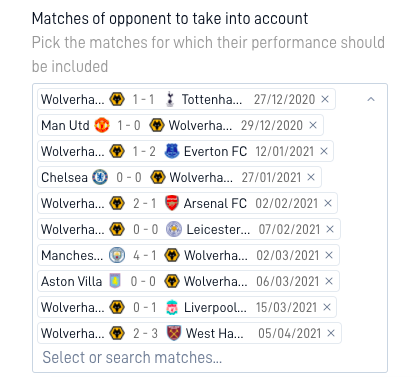 In this case, we want to take a look at how Wolverhampton Wanderers have performed against top half opposition since the last time Tottenham played them in December. For this, we select all the matches that they have played against teams in the top half of the table. And, as shown below, we are also able to select the formation you want to play. We will show how your opponent plays against your formation. For this example, we will choose the 5-4-1 and 5-3-2 for expected formations.

Now that we have selected the opponent, desired matches for analysis and likely formations of the opponent, we can hit the 'Create report' button to begin downloading the Opponent Analysis report.

Please see other articles here for more information on the app's functionalities.