All Collections
Recruitment Platform - Player Assessment
GBE filter
What is the GBE filter and how can I use it?

What is the GBE filter and how can I use it?

For users of the SciSports GBE points calculator, this article runs through some Frequently Asked Questions in line with the current Recruitment Application offering of GBE services. 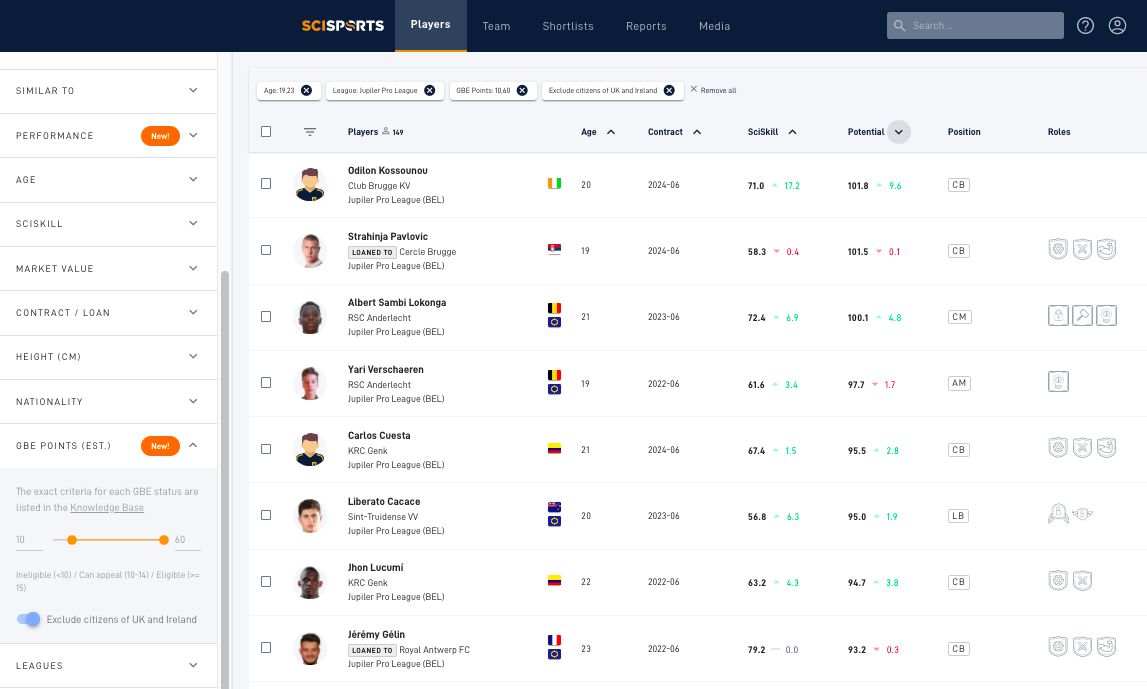 What is the Governing Body Endorsement (GBE)?

Following the United Kingdom's exit from the European Union as of January 1 2021, the English Football Association (FA) have introduced a points-based system that foreign players need to pass in order to gain eligibility to play in the Premier League or English Football League (EFL).

The following criteria will be used in order to total up a player's points tally in line with the regulations:

For more information on the GBE rules and regulations, please refer directly to the FA's regulations documentation here.

How will it change the way of working in England?

The introduction of GBE regulations has created another obstacle for English clubs in their recruitment processes. A points-based system means that previous markets of interest could now be less likely to qualify for the required points.

It is likely that clubs will now explore markets more in favour of earning the required points. For example, clubs in South America who regularly feature in the Copa Libertadores and Copa Sudamericana will likely have players who earn the required points through Continental Minutes and Continental Progression.

Through the use of SciSports' player database of over 180,000 players, reaching those markets is easily accessible with data-driven insights on SciSkill, Player Roles and Performance. Alongside a GBE filter to help provide an indication of how players score on the regulations, scouting through the SciSports Recruitment Application can provide key insights for English clubs.

How does SciSports support this change?

With the assistance of our GBE points calculator, users will no longer have to do manual calculations in order to check a player's availability. Instead, an instant check of a player via the Application can show you his GBE status and subsequent breakdown of points. As shown below, users can view the GBE eligibility of a player alongside the breakdown of their points total. 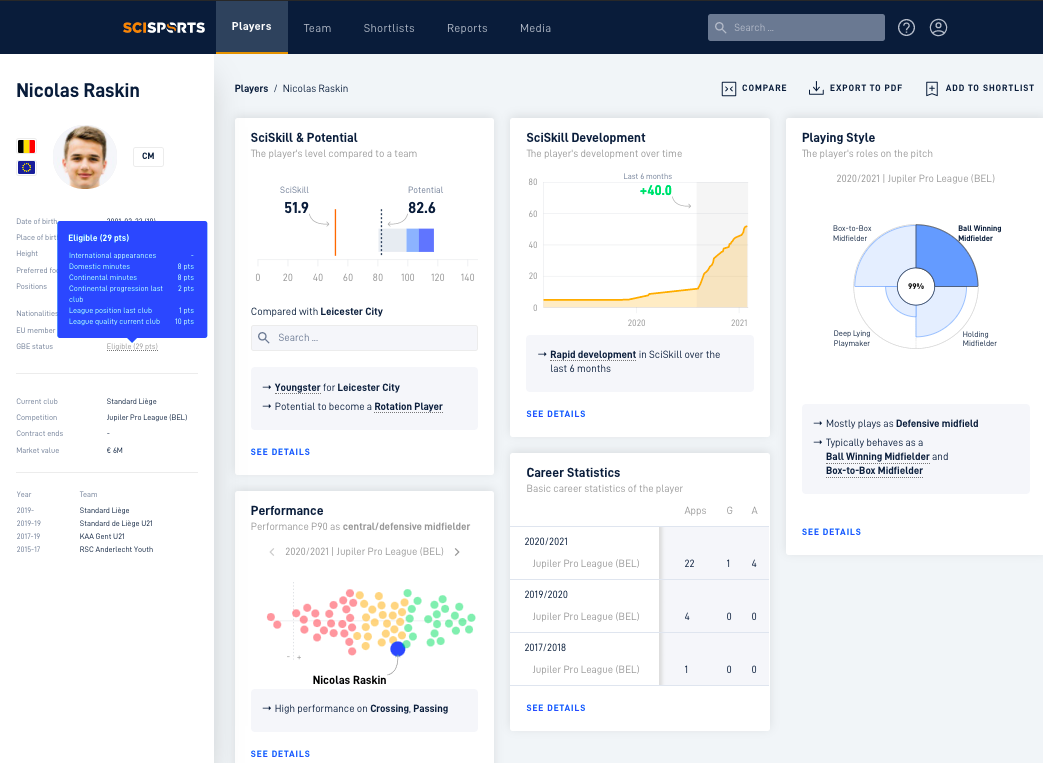 By using this automated process, backed by data-driven solutions, users can save time and resources to spend time on the elements that matter most in player recruitment i.e. scouting, video analysis, etc. The addition of a filter on GBE score means that clubs will be able to exclude players less relevant for specific scouting missions.

In the case of insufficient data for a particular point of criteria, a dash sign will be presented. In some cases, data availability for some lesser known leagues and competitions can result in differences in scores across providers.

How does the GBE calculator work and have you considered Youth Criteria?

As illustrated above, the intuition behind this functionality is to provide an indication of a player's GBE eligibility. That's why, in the case of a player earning 'Autopass' status through International Appearances, players will simply be shown as an automatically eligible player.

Most importantly, GBE scores computed through our model will be automatically updated after every match played. This is inherently important given that the weighting of minutes or matches played could differ from match-to-match and ultimately determine the outcome of a player's points total. Providing a GBE points estimation through this method saves time and resources instead of doing it on a manual basis for each player.

As per the FA's new regulations, clubs will not be able to sign players under the age of 18. Therefore, in the event of finding a player of interest under that age bracket, their GBE points total will still show yet a caution note will appear.

Given that Premier League and EFL clubs will be unable to sign players under the age of 18, we have chosen to still show the GBE scores for under 18s but in the knowledge that users are aware of these regulations. In the case of a player turning 18 years old in the coming days or weeks, knowing his points total beforehand is equally valuable.

Through this way of working, we want to ensure that players will not be immediately cut out of the picture due to their age. Instead, a 17-year-old can be tracked over time and subsequently recruited once he meets the age criteria - alongside the other GBE regulations.

Further additions will be made as and when we have the required data available and can therefore consider Youth Criteria in full.

Is there anything else that I need to know?

One element worth reiterating is that this feature only provides an indication of a player's GBE points total. With the FA's regulations due a possible refinement before the summer transfer window, we will make sure that any technical changes are up to date as per the FA's latest updates.

At the time of writing, we are still working on ways to include injury data into the Domestic League Minutes criteria point. For that reason, this aspect should only be taken as an indicator right now.

If your GBE-related question has not been answered here, please reach out to support@scisports.com and one of our Football Consultants will get back to you as soon as possible.