Pass Disruptiveness - Disrupt the opponent with a pass

Pass disruptiveness is made up of two variables that map the disruption of the opponent.

Individual Induced Movement - Per pass is calculated how much this movement produces the opponent, so it says something about the spaces that are created with that type of pass. This was then standardized per second to compare the effect of passes (Goes et al., 2018).

I-MOV is a tactical parameter that adds a lot of value through the pass success. I-MOV refers to the individual movement by the defending team when the attacking player has made a pass. , standardized per second/meter. A good example of this is a switch of play from the left to the right flank where a lot of movements are required from the opponent. The degree of individual movements made by the defending team's players is being measured between the time that the pass is made and subsequently received. 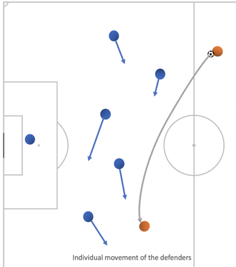 Individual movement of the defending team, created with a pass

*When calculating this, the actual positions are observed to determine the formation and lines rather than using pre-defined formations like on a team sheet 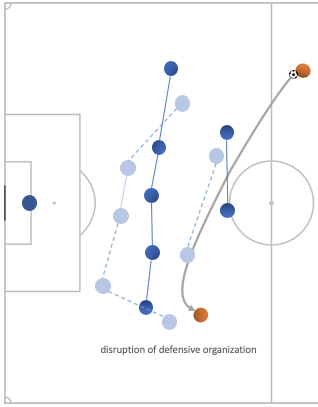 By combining both of these features, the total Defensive Disruption has been made transparent

If you have any questions or suggestions, please send us your feedback.

Use the chat icon on the right to directly get in touch with us.