All Collections
Recruitment Platform - Player Assessment
Compare Players
How do I use the Player Comparison page?

How do I use the Player Comparison page?

How users can directly compare players on a range of factors

To navigate to the Player Comparison page, go to: Player Page > Compare > Select up to two other players > Select season to compare.

A big part of the scouting process can often require a direct comparison of players across a range of countries and leagues. This is why we have incorporated a Player Comparison feature within the platform which enables users to directly compare players no matter which league they are in and also export comparisons into a PDF document (portrait mode recommended).

This is slightly different to the Performance metrics which compare players by league and position on a per 90 minute basis. Instead, the feature allows users to compare any two or three players based on SciSkill development, Career Statistics and Playing Style. For instance, a user may have a shortlist of three potential right-backs they want to sign based on a detailed filter process. Once that process has been completed, the Player Comparison tool allows several different views of those players alongside each other for more direct analysis in an easy-to-use format. 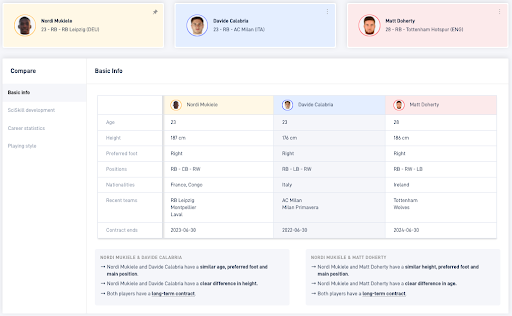 Firstly, and as shown below, we see the first view users will be presented with once two or three players have been selected. This provides information ranging from SciSkill and Potential to the player's position, most recent clubs and contract information.

When wanting to compare players directly, the above view offers a general overview of each player. From this, users can easily see how each player is different from another. In this case, for example, we see three right-backs from the Bundesliga, Serie A and Premier League in direct comparison.

An important element included here is the use of 'take-aways' which provide an overview of the information presented. The 'base player' is directly compared to the other two players with similarities and differences in their basic information. In this example, each set of takeaways will compare Nordi Mukiele directly to the other two right-backs.

To examine this in more depth, users can select the SciSkill Development tab on the left-hand side to be presented with a scatter graph of each player's SciSkill in comparison to one another. By seeing this view, users can see a clear picture of how each player has developed in terms of SciSkill over their career pathway so far. 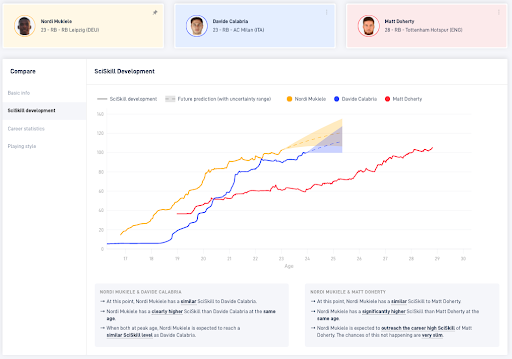 Looking at SciSkill over time can be an effective way of tracking a player's development over the years compared to other interesting players. Again, this is neatly summarised with key points summarising what you see in the graph.

In the next view, the Career Statistics tab allows you to look back through factors such as minutes played, goals scored and assists from the last five domestic league seasons.

Again, this view helps add additional context to the recruitment process by showing the general numbers of each player. Looking back over the last five seasons will provide a quick insight into how regularly the player has played and perhaps bring up any issues such as lack of availability - as well as the option to toggle on a per 90 minutes basis.

Finally, users can also directly compare their chosen players in terms of Playing Style. This provides a quick and easy way to find both similarities and differences in their specific Player Role each season. In this case, all three right-backs mostly aligned with the Defensive Back role throughout the 2019/20 campaign - although it is worth noting how Nordi Mukiele and Davide Calabria also match the Inverted Wing Back and Wing Back roles considerably. 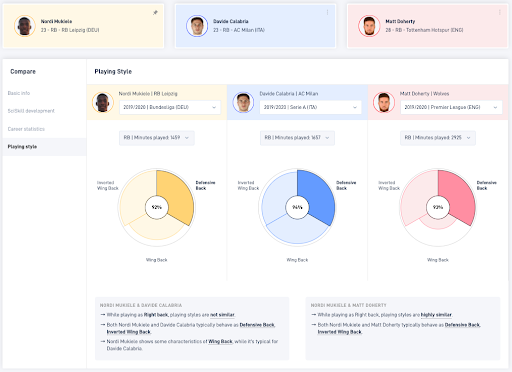 What this allows users to do is go back through the domestic seasons and closely look at whether each player could be a good fit for their specific requirements. By examining a player's specific role over time, users can then have a better overview of their tendencies on the pitch and begin to make better-informed decisions about further scouting through video.

In the end, the Player Comparison tool helps with adding that extra piece of contextual information to directly look at potential signings in one comprehensive tool.