We're excited to present the new SciSports Platform v2. This release contains a major update of players’ profile pages on the platform! So, what's new?

With the goal to make the life of a football scout a little easier, we’ve worked on a complete make-over of the player page in the SciSports Platform. This new player page should enable you to easily assess an individual player in the blink of an eye. We’ve done this by providing insights on the player’s personal details, entire career, playing time and productivity in most recent seasons, and foremost the most important (high-level) take-aways of the SciSports metrics at the home page of an individual player!

From this player’s home page you can navigate to more in-depth information on each of the topics presented here, via the SEE DETAILS at the bottom of the corresponding tile.

The SciSkill & Potential insights are there to help you contextualise a player’s SciSkill and Potential by comparing him with a team of your choice (presumably your own team). The corresponding tile on the home page directly returns the player’s expected role in the selected team, such as “Rotation Player” or “Key Player”, such that you already get a good feeling of a player’s (potential) skill level in relation to your own team when looking at his home page.

On the detailed page for SciSkill & Potential we present all players of the selected team, including the player you are viewing, as if he was part of that team. With this, you can easily see what position he would take in the team, based on SciSkill and Potential. You can even further zoom in on players that play in similar positions and/or belong to a similar age range by applying the filters at the top of this page! 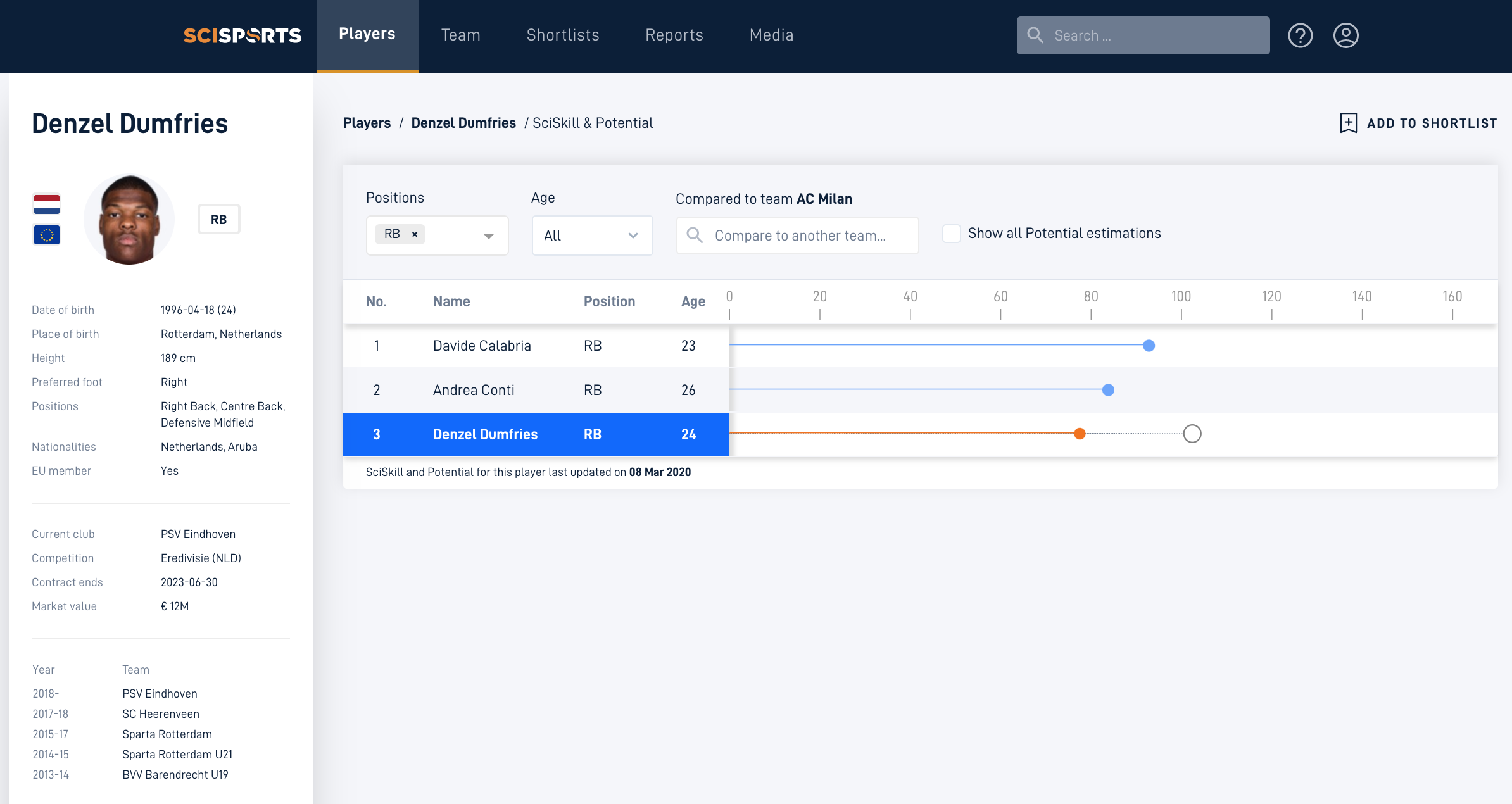 The SciSkill Development insights are there to help you contextualise a player’s SciSkill development over time. The corresponding tile on the home page presents the player’s recent development both in the form of a chart and a concrete take-away, such as “Rapid development” or “Minor decline”.

On the detailed page of SciSkill Development you can view the player’s SciSkill development over his entire career. Furthermore, we plotted the player’s Potential at his peak age, such that you get a feeling of the player’s expected development in the coming years! Note that the somewhat older player’s will not have this, since they passed their peak age. 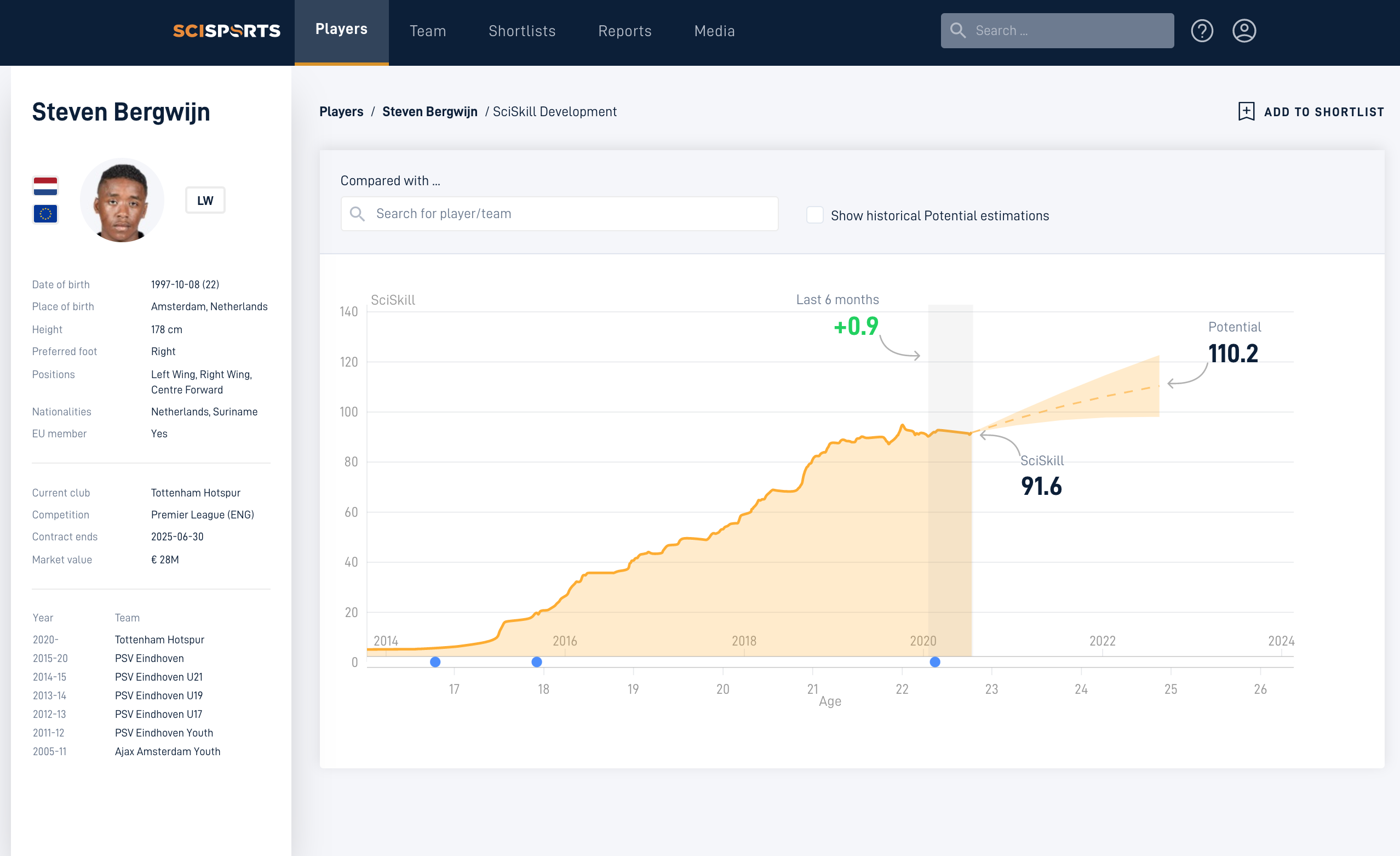 The Playing Style insights are there to help you contextualise a player’s style of play. The corresponding tile on the home page highlights the player’s playing style and main position for the most recent season. 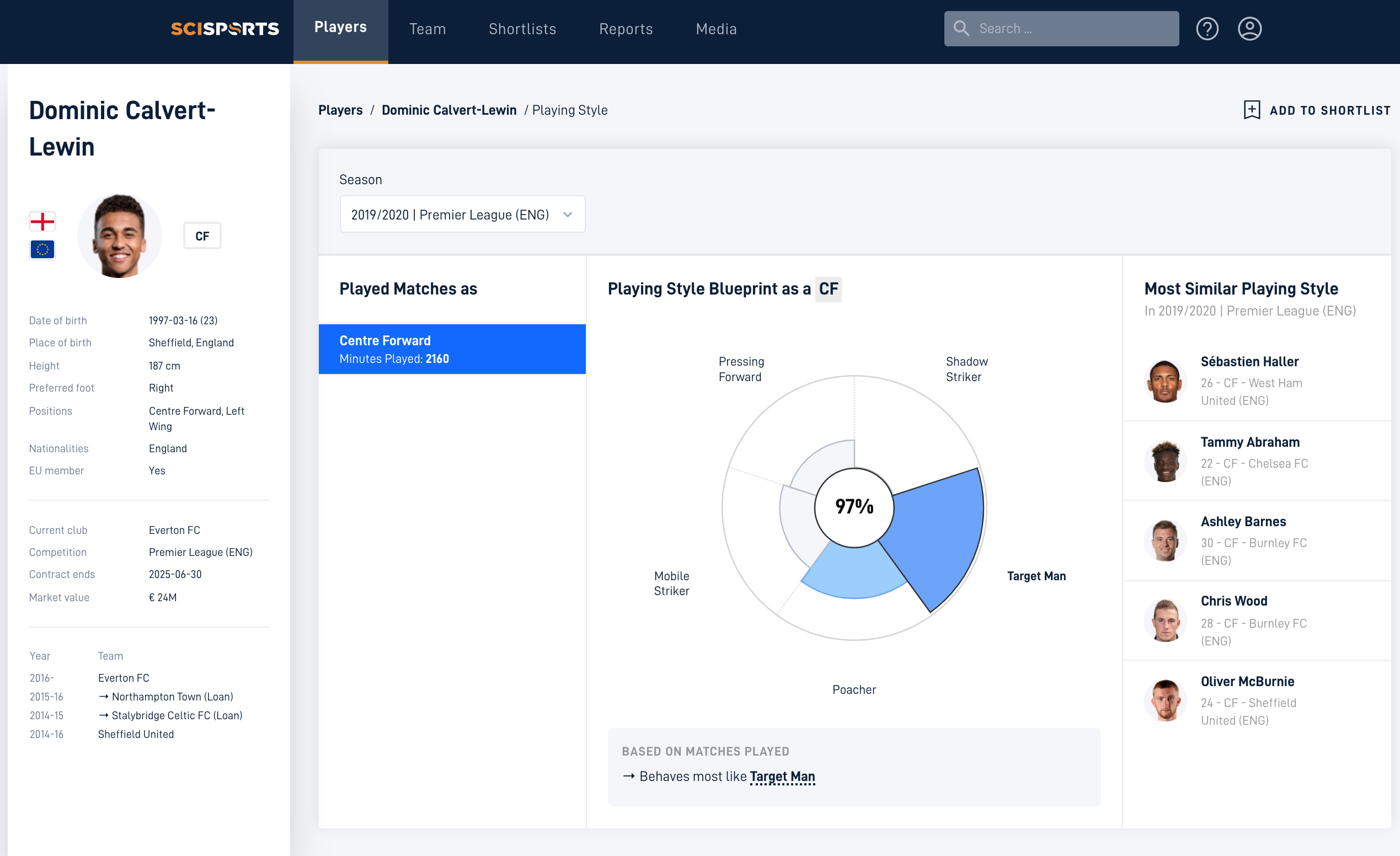 The Performance insights, formerly known as Contribution Ratings, are there to help you contextualise a player’s recent and past performances, by measuring his contribution to the team on a range of actions. The corresponding tile on the home page highlights the player’s overall performance for the most recent season, compared with players who play in similar positions within the same league.

On the detailed page of Performance you can view the player’s performance on a range of offensive and defensive action types for several seasons, similar to the former Contribution Ratings page. New functionality here is the option to set other players in the chart as a reference! 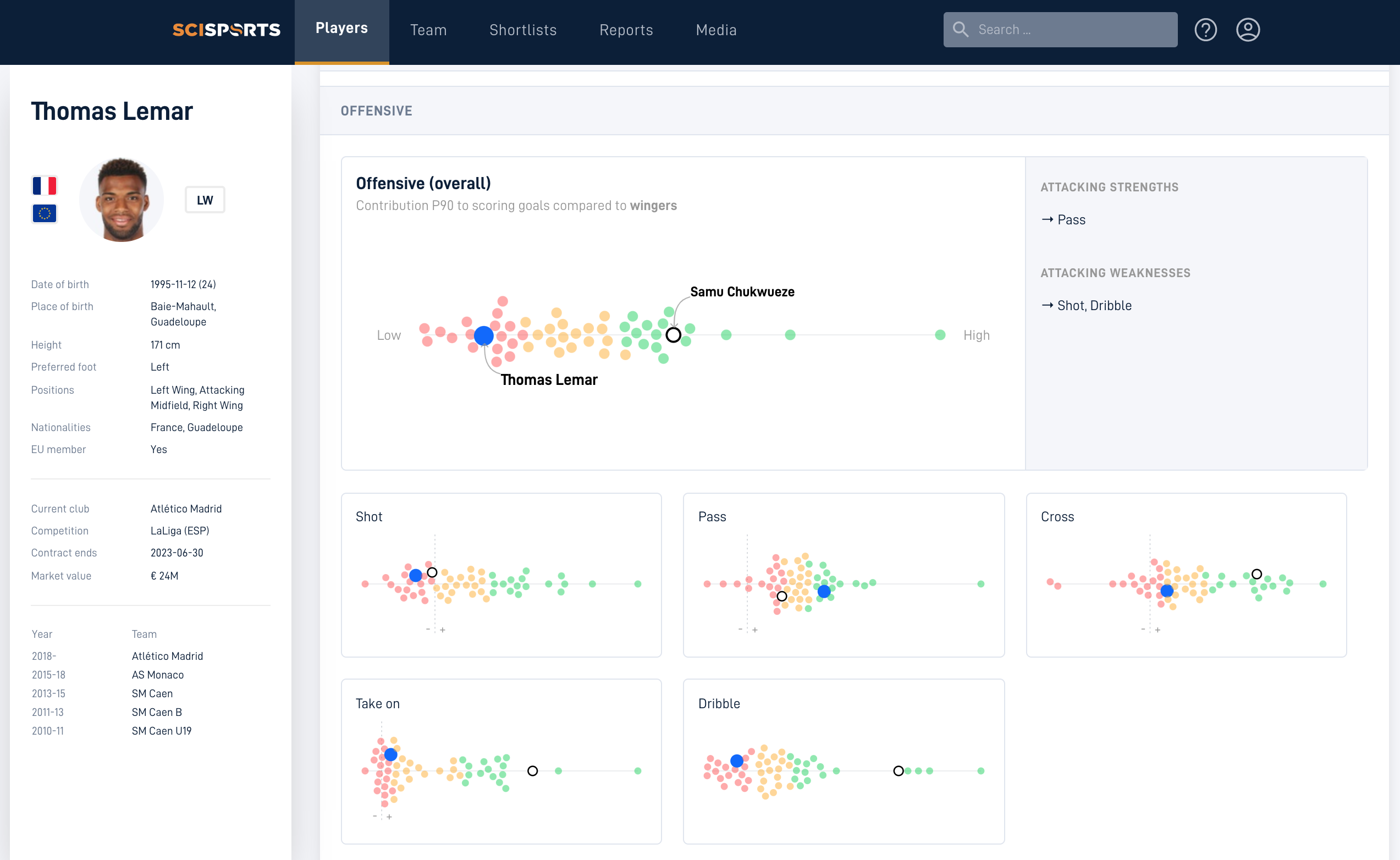 Before this release we only offered insights for players who played a match during the last year. One of the reasons for this was that we could not clearly warn the user that the insights we offered could be outdated because of this period of more than a year of inactivity. With the new player page we also implemented clear warnings and notifications for players who have not been playing for over a year, or for players who just started their career and only played a handful of matches.

With this release we significantly increased the number of players in the platform by adding these players to the mix. Furthermore, we also significantly improved our coverage in a wide range of leagues. Please look into this article for an overview of the leagues that we cover. 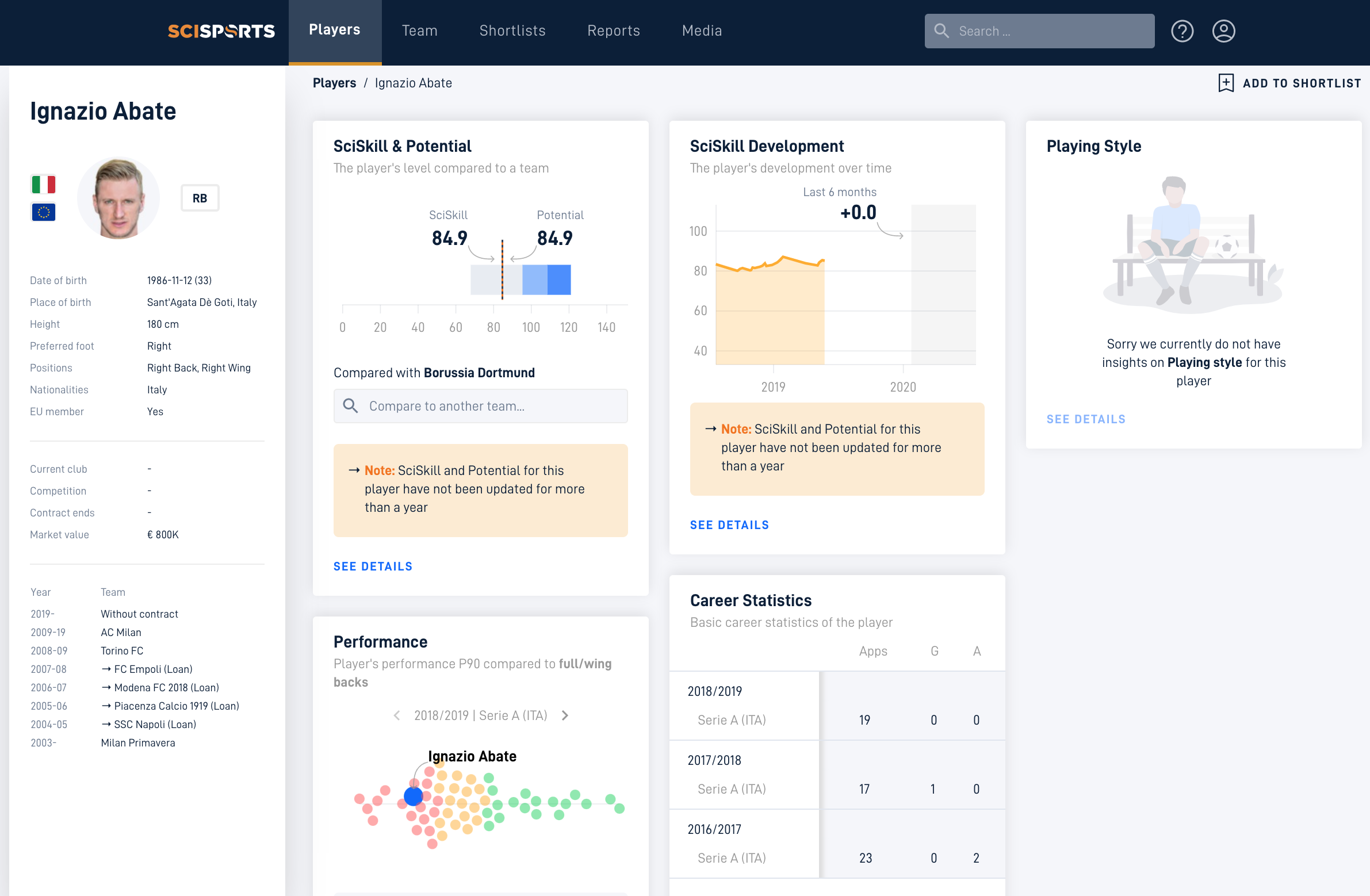