All Collections
Recruitment Platform - Player Assessment
SciSkill & Potential
How do I know within which SciSkill and Potential range to scout?

How do I know within which SciSkill and Potential range to scout?

Insights into how the SciSkill Index can be applied to scouting

By analysing the SciSkill and Potential of the players in your own team and the ones of the players in other teams in your league, you can determine within which SciSkill and Potential range any potential signing's level should be. To help you with this, we added a SciSkill comparison with a team of your choice on every player’s home page. Based on this, you can easily determine whether the player under consideration meets your skill criteria, but it could also help you understand what SciSkill ranges you would like to scout.

In the example below, you can see the SciSkill and Potential of Donny van de Beek. When you compare a player to a specific club, you can see the current and potential level of the player and how the player fits based on SciSkill. With this tool, you can easily define the range you want to scout within. Your scouting range could be, for example, only players who are or have the Potential to become a Key Player. 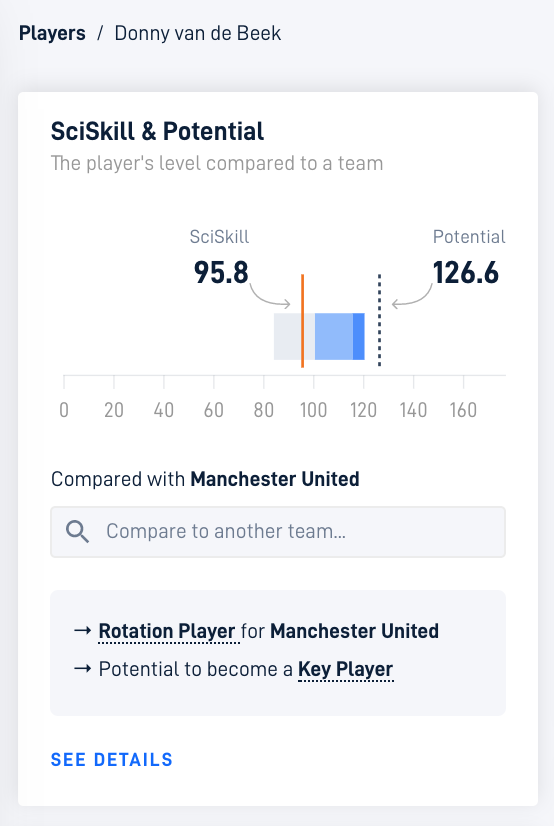 According to the take-aways here, Donny van de Beek will currently be a Rotation Player for Manchester United with the potential to become a Key Player.

The squad roles in the take-always are based on a comparison between the player’s SciSkill and Potential and the SciSkillI of players within the selected team. Basically, players who have similar skill levels as most of the first 11 of the selected team, are considered to be First Team players. If the player is far behind the first 11, he will be considered a Backup player. In the table below, you can find the definitions of the squad roles.

For further analysis of a player's SciSkill and Potential compared to that of the selected team, click SEE DETAILS as shown in the snapshot above. In addition, this page lets you compare the player with his potential competitors. You can do this by filtering on players that play in similar positions and/or fall in the same age range.

In addition to SciSkill & Potential comparison on a player’s profile page, you can also make use of our Guided Player Search (at the Home page) to define the right SciSkill and Potential ranges for your search. This will assist you in defining the right ranges based on your season objectives and the type of player you're looking to replace.

Once you’re familiar with the right range of SciSkill and Potential for your team, you can use it as a first filter in assessing players. Is a player clearly below your desired range? Then you may conclude that, based on his performances, he is not the right player for your team. Does a player meet your SciSkill criteria? Then you might want to look at other metrics to determine whether a player fits your team.