All Collections
Recruitment Platform - Player Assessment
Performance
What does Offensive Performance consist of?

What does Offensive Performance consist of?

A closer look at how Offensive Positioning is computed

As explained in this article, the Performance metrics in the SciSports Recruitment Application assess the impact of each player's actions on the course of a match.

The offensive variant of Performance considers the actions that mostly contribute to scoring goals. We measure a player’s offensive performance on a range of six distinct action types. This includes Passing, Crossing, Dribbling, Finishing, Ball Retention and Offensive Positioning. The overall charts shows the total contribution on all six action types. All the offensive performances are compared to other players in the same position and league. In the snapshot below, Robert Lewandowski (blue) is ranked against other Bundesliga centre forwards on a per 90 minute basis from this season. 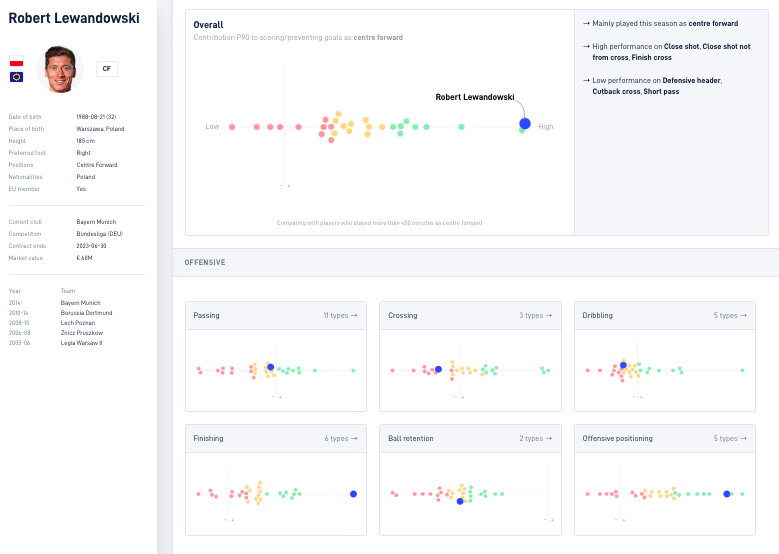 From this view, users can then navigate into individual action groups where you will find specific action types per group. For instance, Finishing is categorised into Close Shot, Long Distance Shot, Offensive Header, Offensive Header from Set Piece, Close Shot Not From Cross and Finish Cross. This enables a detailed overview of each player's specific qualities compared to his direct competitors in the league.

As you will see below, we have included some video examples of specific action types.

Any attempt on goal. This could vary between a shot and a header, or any other direct type of attempt to score a goal. Besides shots on target, also shots wide and blocked shots are taken into account here.

Any pass made within the opposition's final third. Measuring the quality of this type of pass gives an overview of how much value that player adds with his passing in key attacking areas.

A Cutback Cross is defined as a low cross from the back line inside the opponent penalty box. This type of cross is often an attempt from the attacking player to find a teammate within the penalty box.

A dribble with the aim to outplay an opponent and thereby create space. This includes both successful and unsuccessful take ons.