What does Performance represent?

With Performance we mean the former Contribution Ratings, which shows the value of a set of player actions based on their impact on the scoreline. On top of the SciSkill index, the Performance metrics provide insights into how a player both offensively and defensively contributes to the performances of his team. Furthermore, the module in the platform shows how each player rates on different aspects of the football game compared to all other players in the same position in the same league.

The metrics help you answer questions, such as:

The performance of a player shows a quick overview of the value, offensive and defensive, that a player performed during a selected season. You are able to switch within different seasons, what gives you the opportunity to compare performance of a player over selected seasons. In the example below, Robert Lewandowski has had a big offensive value compared to other strikers in the league. 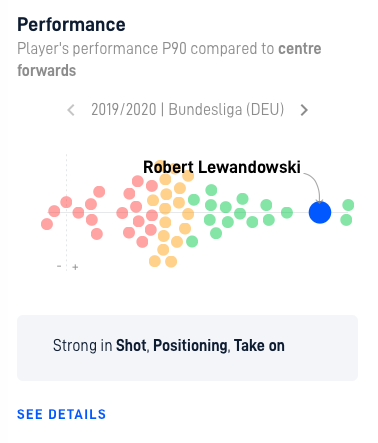