We've extended the Performance section with an additional category named Defensive positioning which sheds light on the extent to which players suppress valuable crosses, dribbles, passes and shots from their opponents.

How could you use Defensive Positioning?

In comparison to the other action slices from all the other categories, all Defensive Positioning subcategories are not typical “on-the-ball-actions". Instead of looking at the chance of scoring and conceding a goal from the match situation, we evaluate the contribution a player has on the performance of his direct opponent. Specifically, a player receives positive credit when their direct opponent has a lower Contribution Rating for offensive actions than his expected Contribution based on earlier performances. Putting a difficult measure in easy terms: A defender who has a high contribution in terms of his Defensive Positioning can be seen as a defender who makes opposing players underperform in comparison to their expected contribution.

How to evaluate Defensive Positioning? 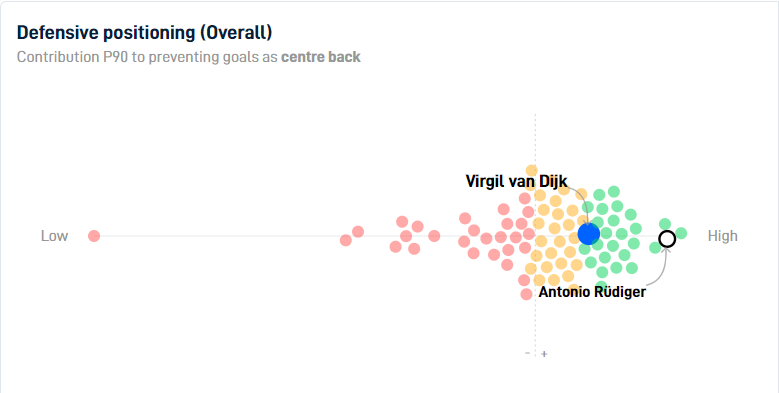 The four subcategories enrich our knowledge about the defensive impact of a player. Taking the category Suppress Dribbles for example: A player high on suppressing dribblings is a player, who makes sure that his opponents underperform in terms of their contribution with dribblings (as you can see below). The same is valid for passing, crossing and shooting the ball. 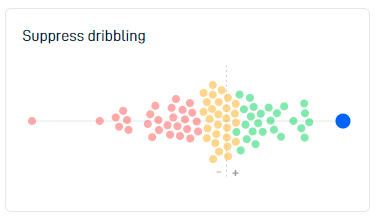 The value of Rüdiger for his team, based on Suppress Dribbling

Using Defensive Positioning in the identification of interesting Players

To give you an idea of ​​how you could use the Defensive Positioning, we use the example of SC Heerenveen. The club might be looking for a Defensive Midfielder. The player must be able to put good pressure on the passing of his opponents. Compared to the current Heerenveen player Rodney Kongolo, Rico Strieder could be of added value for SC Heerenveen when it comes to Suppress Passing.

Suppress Passing of all the central/defensive midfielders in the Dutch Eredivisie.

A closer look at Defensive Positioning

To give you an idea of how these Defensive Positioning computations work, we provide an example computation of the contribution on Defensive Positioning of Séamus Coleman (Everton FC) in the Premier League match against Crystal Palace on February 8, 2020. In this match, Coleman’s direct opponent was Wilfried Zaha. In recent matches, Zaha reached an overall offensive contribution of around 0.4 per 90 minutes. In the match against Everton, Zaha only reached an overall offensive contribution of 0.3, which is -0.1 compared to what we would expect based on recent performances. Therefore, we consider the contribution on Defensive Positioning of Séamus Coleman to be +0.1 for this match. Note: this is a simplified representation of the actual calculation. In practice, the model also assigns a part of the defensive contribution to surrounding players (Yerry Mina, Morgan Schneiderlin and Theo Walcott), and accounts for other factors, such as substitutes and positional switches too.