To navigate to the Player Comparison page, go to: Player Page > Compare > Select up to two other players > Select season to compare > Scroll to see different views.

A big part of the scouting process can often require direct comparison of players across a range of countries and leagues. This is why we have incorporated a Player Comparison feature within the platform which provides supportive information to be able to directly compare players no matter which league they are in.

This is slightly different to the Performance metrics which compare players by league and position. Instead, the feature allows users to compare any two or three players based on SciSkill and Career Statistics. For instance, a user may have a shortlist of three potential right-backs they want to sign based on a detailed filter process. Once that process has happened, the Player Comparison tool allows several different views of those players alongside each other.

Firstly, and as shown below, we see the first view users will be presented with once upto two or three players have been selected. This provides information ranging from SciSkill and Potential to the player's position and most recent clubs.

When wanting to compare players directly, the above view offers a general overview of each player. From this, users can easily see how each player is different from another. In this case, for example, we see three centre forwards towards the end of their career who have varying levels of SciSkill.

To examine this in more depth, users can scroll down to be presented with a scatter graph of each player's SciSkill in comparison to each other. By seeing this view, users can see a clear picture of how each player has developed in terms of SciSkill over their career pathway so far. 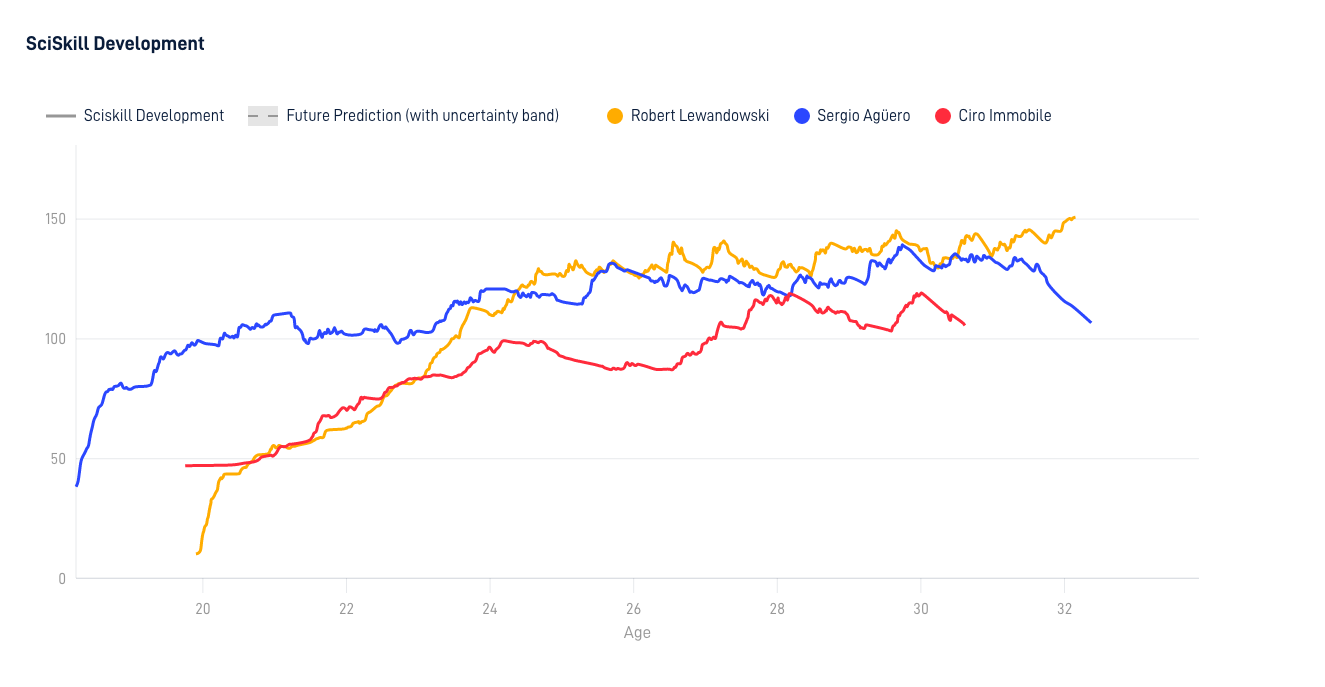 In this use case, we see that Robert Lewandowski has continued to improve in SciSkill despite reaching the latter years of what is widely-regarded as an outfielder's physical peak. By contrast, Sergio Aguero's SciSkill has dropped within the last year which shows a notable difference in their development.

Looking at SciSkill over time can be an effective way of tracking a player's development over the years compared to other interesting players. Any peaks or drops in SciSkill at different stages may require further research into why that happened. For instance, a player may have played in a formation that didn't suit their style of play and that can further strengthen a user's knowledge on a player.

Furthermore, the view of the Player Comparison page will show each chosen player's Career Statistics from a selected season. This information currently goes back over the last five domestic league seasons only.

Again, this view helps add additional context to the recruitment process by showing the general numbers of each player. A user may have found three potential goal-scoring options to sign and this overview of statistics provides accessible insight on how they compare in different metrics - as well as the option to toggle on a per 90 minutes basis.

Furthermore, users now have the added functionality of being able to directly compare the Playing Style of selected players. To help paint a full picture of the players in comparison, detecting any differences in their style of play is very important.

As shown here, all three strikers align with the Mobile Striker role yet Lewandowski also meets most of the requirements to be considered as a Poacher.

From this view, users can gain a better understanding of which players may best fit their specific style of play. Further comparisons can be drawn across each position type and the Player Roles explainer here may also be useful to address.

In the end, the Player Comparison tool helps with adding that extra piece of contextual information to directly look at potential signings in one look.