The IPC Potential is computed for every ball reception, as a score between 0 - 100% to quantify the potential of creating an opportunity.

The IPC Potential is computed for every individual ball reception, as a score between 0 - 100%, indicating the potential to create an opportunity following that reception. The potential is computed based on a combination of field position in relation to the goal, and pressure from all defenders on the ball-possessing players [1]. As a result, players can have a potential opportunity, even though they do not actually shoot the ball towards the goal, as the IPC Potential score merely indicates they had the opportunity to do so, even when they did not shoot. 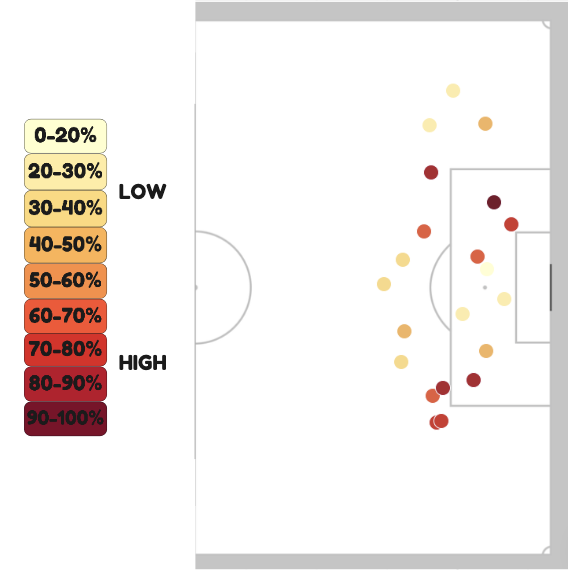 The IPC Potential can be used to identify key moments during post-match analysis. Player-specific opportunity maps can be generated to evaluate your own team or your (upcoming) opponent. Dangerous regions or players that may need extra defensive attention could easily be identified. We leave the interpretation to you, however we are more than willing to share our thoughts and discuss about how to use the features. Please do not hesitate to get in touch with us.

Experts will immediately recognise the similarities of the IPC Potential with the widely known Expected Goals (xG) [5]. Which is understandable but there are huge differences between both models.

The xG measures the conversion probability of a shot based on location on the pitch and the event following (e.g. shot, headed shot). It assigns the quality with a value ranging from 0 to 1 for each shot at goal. For example, an xG of 0.41 means that 41% of the shots taken from that position would lead to a goal. [5]

IPC Potential
Features derived from spatio-temporal information (position data) are considered as more valuable metrics to evaluate player's performance than the features based on notational analysis [4]. Especially features directly related to, or partly include off-the-ball activity show the highest correlation with winning a match. The IPC Potential is a combination of these promising features. The biggest advantage of the IPC Potential is therefore that the player and team performance can be evaluated based on off-the-ball activity. The xG is limited to events where the shot is actually taken.